Is there any link between PM2.5 pollution and depression?

🙄 In this article, you’ll find out some facts from the study about:

In Indonesia, depression is extremely common among young adults. The prevalence of depression in Indonesia is estimated to be around 3.7% of the total population, but it could be higher. Moreover, some studies suggested a plausible link between air pollution exposure and mental health problems. Now, let's break this down together!

What depression really is

Depression is more than just a bad mood, and it's not something you can "snap out of." Depression is a mood disorder characterized by a persistent sense of sadness and loss of interest. It affects how you feel, think, and behave and can lead to a variety of emotional and physical problems. Depression may necessitate long-term care.

Worldwide, 10-20% of children and adolescents have mental health problems. According to research, the majority of adult psychopathologies begin in childhood and adolescence, with those whose problems start early and persist having the worst prognosis. Due to their still-developing brains, children may be extremely prone to neurologic damage from air pollution. They are more likely to have less established natural barriers in the lungs to protect against inhaled particles, resulting in a higher breathing rate to body size ratio. This exposure to air pollution can influence the development of disorders later in life.

PM2.5 exposure was associated with an increase in depressive symptoms

The persistent sadness or loss of interest that characterizes major depression can result in a variety of behavioral and physical symptoms. According to a study conducted in London, with an estimated annual mean concentration for PM2.5 of 15.09 μg/m3, air pollution was associated with higher symptoms and a higher likelihood of a diagnosis of depression and behavioral disorders at age 18. According to the study, those exposed to pollution at levels greater than 15.09 μg/m3 had 3-4 times greater odds of developing depression by age 18 than those exposed to the least amount of pollution.

So, what are the levels of PM2.5 pollution concentration and the risk of increased depression symptoms? Take a look at the following graph! On average, PM2.5 pollution is high over the last 6 months. In fact, the most polluted region of PM2.5 concentration in Indonesia — South Tangerang — has a risk of increased depressive disorder symptoms of up to 45%!

🤔 Let's explore the data for each city in more detail! 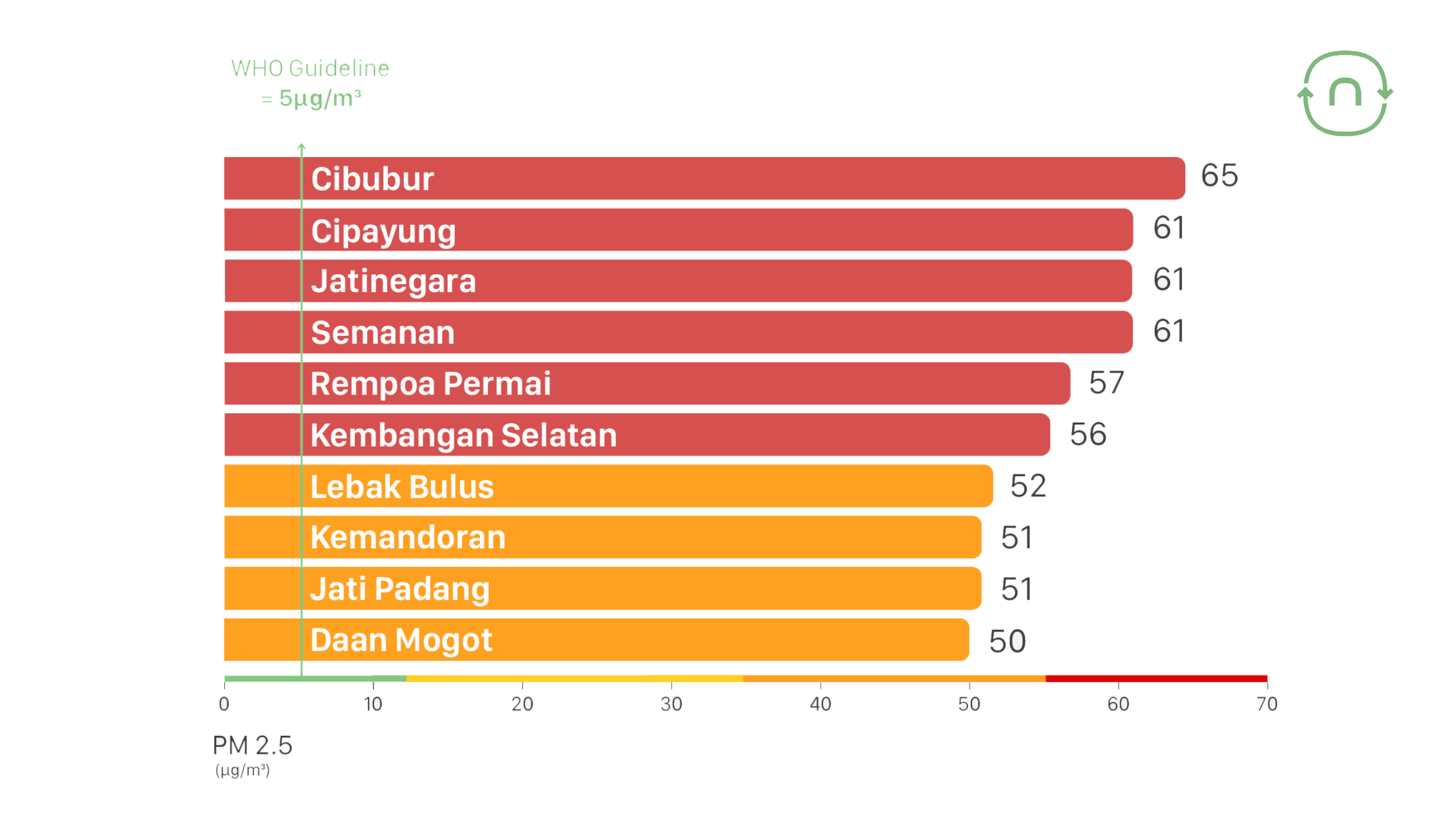 Cibubur in DKI Jakarta has had the highest PM2.5 concentration over the past six months, at 65 μg/m3, 13x the WHO-recommended limit. 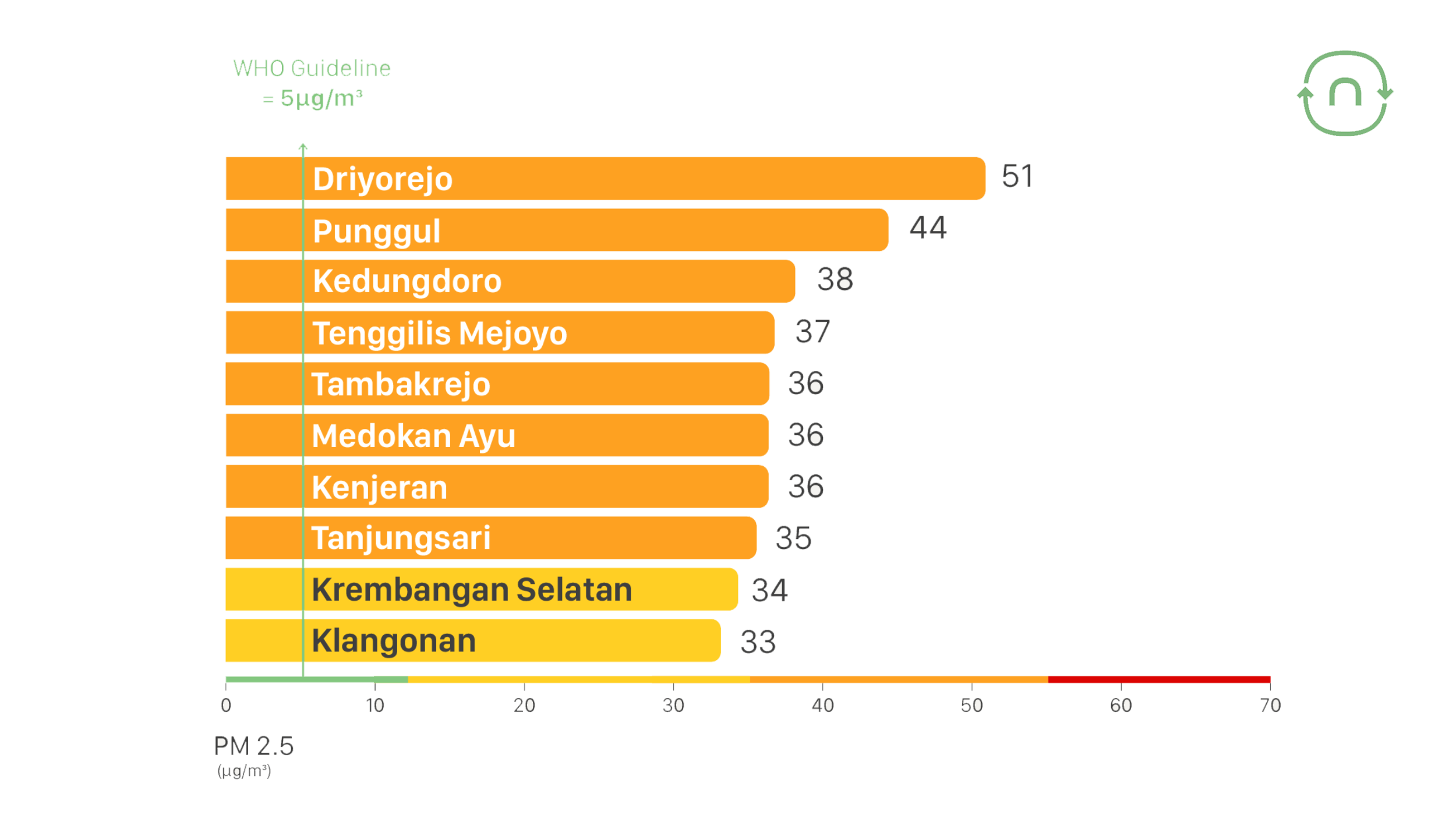 Last but not least, Driyorejo is the Surabaya location with the worst air quality, with PM2.5 concentrations reaching 51 μg/m3, or 10.2x the WHO recommended limit.

Indonesia's air quality is not okay Based on the air quality in the four cities, as well as Nafas analysis and the aforementioned studies, the following areas could be at risk of a 44% increase in depressive symptoms on average. This is deeply concerning, given that clean air is essential to preserve our well-being, both mentally and physically.

Actions you can take to minimize exposure to air pollution

We offer some simple and effective tips for protecting yourself and your family from the threat of air pollution:

🌬️ Want to stay informed about the air quality in your home location? Download the Nafas app and maximize its exciting features!