Does the 'bowl' shape affect air quality in Bandung?

Bandung, a popular tourist destination (especially on weekends), is known for its fresh, cool, and clean air. Unfortunately, that's not always the situation.

A week ago, some residents were surprised when they discovered that the morning air in Bandung was worse than the air in Jakarta. Check out the Bandung air quality in the morning! 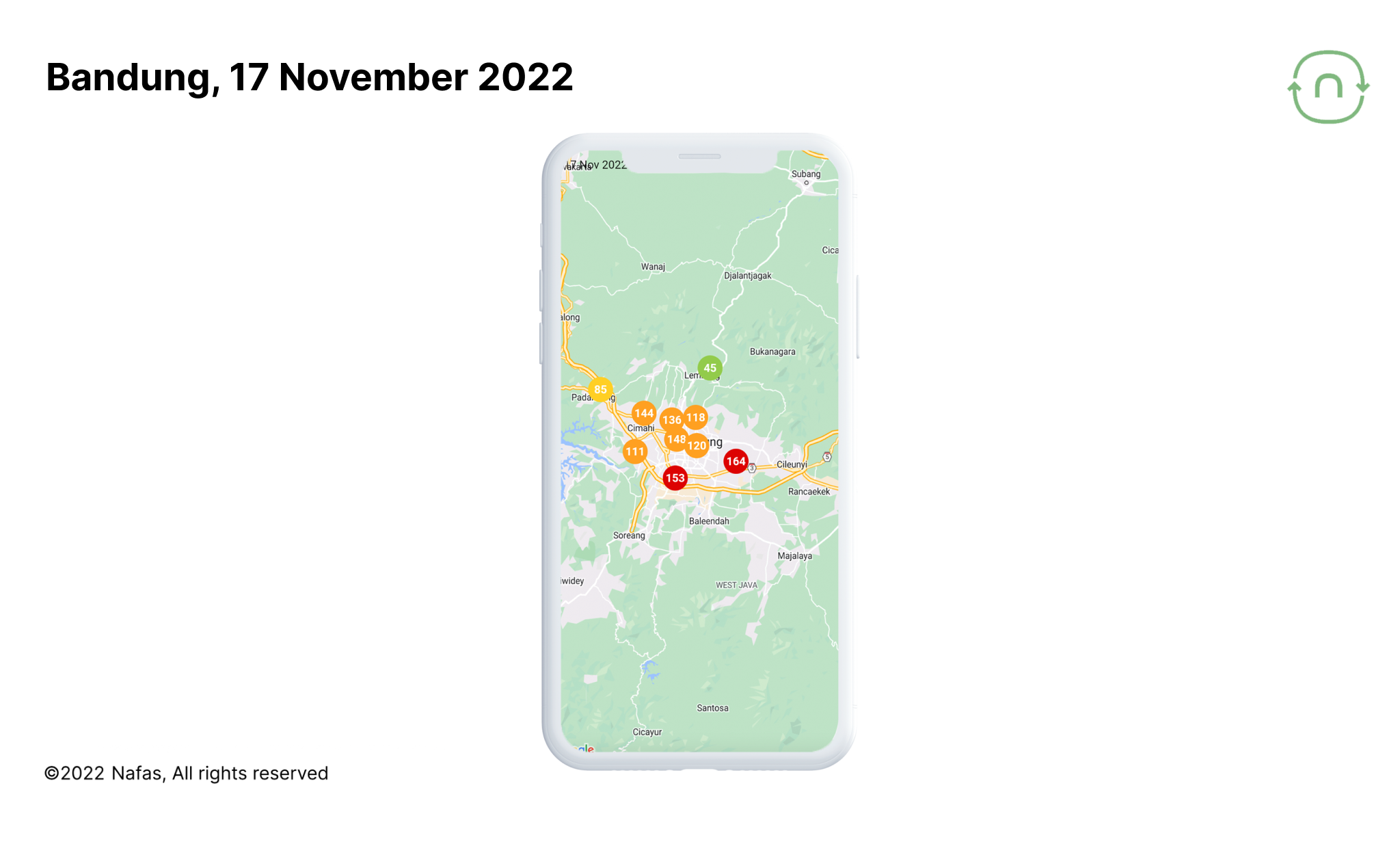 The orange and red colors are indicating that the air quality there were not good. Lembang was the only area with healthy air, hence the color is green. Why did that happen?

📌 Pay attention to three things we’ll discuss in this article:

Now, let's learn about the uniqueness of Bandung and its air quality together!

Bandung's topography creates a distinct pattern for its air quality

Bandung, which is surrounded by mountains, has a unique air quality. This uniqueness doesn’t only come from the local sources of air pollution, but also influenced by topographical factors.

Bandung's terrain resembles a bowl. If any local particulate pollutants accumulates in it, it will become trapped and difficult to expel from the bowl when the bowl is closed (morning & night). But when the lid is open (afternoon) then the pollutant can easily disperse to any direction. The lid is refer to boundary layer, and you can read more about it here.

Let's see the difference in air quality at these locations! 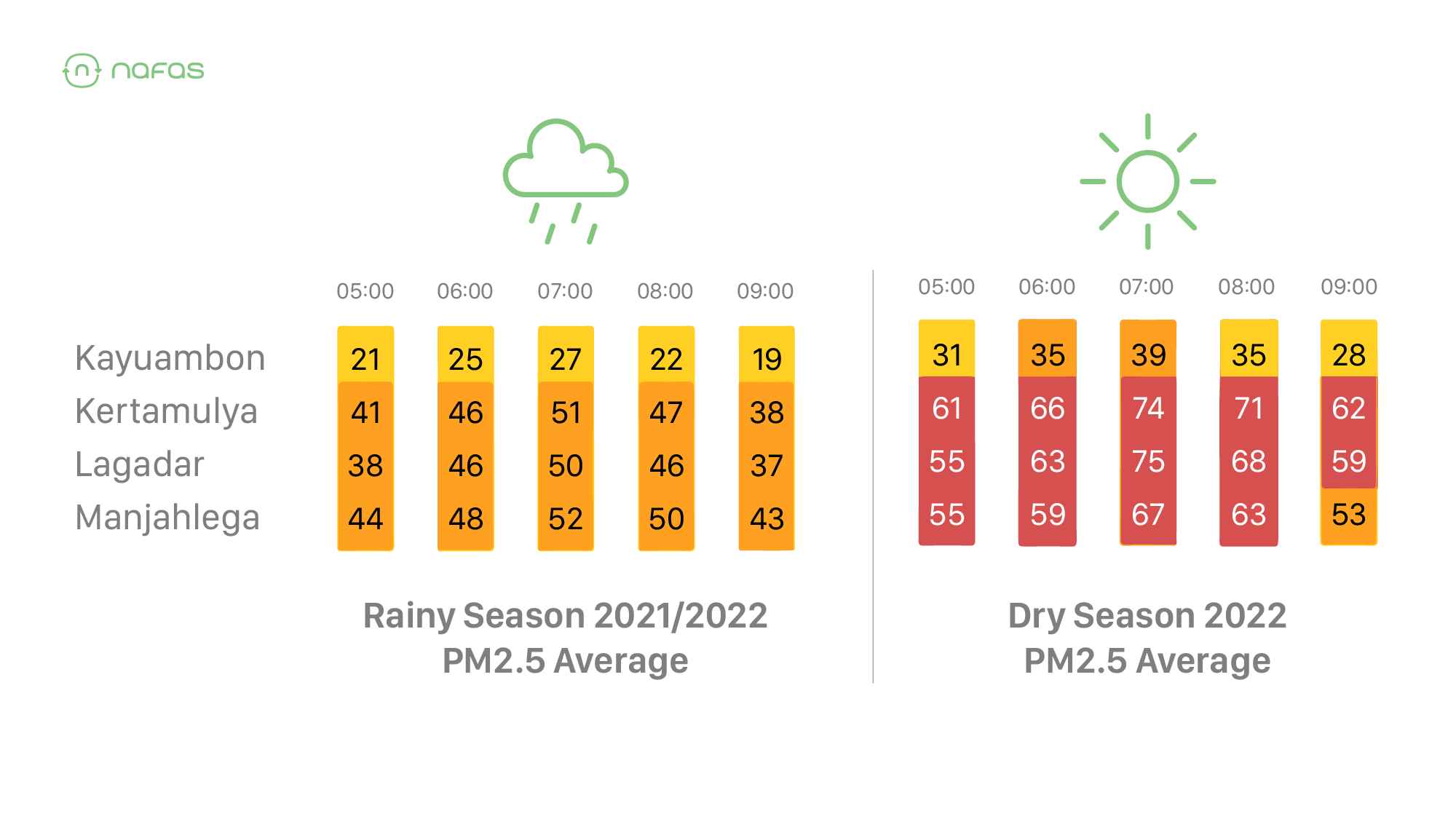 By average in the morning, the upland areas of Kayuambon and Lembang tend to have better air quality than the lowland areas of Padalarang (Kertamulya) and Margahayu (Manjahlega). These air pollutants accumulate at the bottom of the bowl, making the air quality relatively bad.

The Nafas Team observed that PM2.5 on a city scale always creates a pattern hour to hour because of atmospheric conditions. To mention one thing - mostly affected by wind.

Let's look at this example of hourly data together!

You may have a thought: “Yes, the pollutants more concentrated at the basin compared to the one at Lembang.”

Yes, aside from local sources, heading to 9 AM the PM2.5 pattern appear to changed due to the blowing wind to the southern mountains. The wind direction graph below confirmed that on 9 AM, the wind starts moving direction, from southeast (~150°) then coming from northeast side (~40°). This is consistent with the findings of a study, which discovered that during the rainy season, valley winds in the morning tend to head towards the southern mountains of the Bandung basin due to its stronger convective cloud activity, which promotes the accumulation of pollutants in the Bandung basin's south-southeast area since all winds heading there.

Keep yourself updated on the air quality in your location

We now understand that topography and local winds contribute to changes in air quality. Even if conditions change and air pollution persist, wind direction and speed can still be used to forecast it. As a result, forecasting air quality has become easier. Regular air quality monitoring is also recommended to protect our bodies from exposure to air pollution.

Nafas has installed more than 180 air quality monitoring sensors in several cities in Indonesia. Through the Nafas app, you can find out the air quality in your location in real-time, complete with predictions for the next 24 hours. You can also find a summary of air quality data in your location for the last 7 days through nafas Insights.

Interested in hosting a sensor in your city? You can register yourself here.